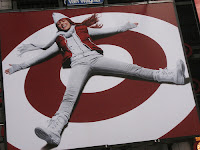 Target, for sure. Look who’s just asking for it.

Have we learned nothing? Limit yourself to traditional media, and you might as well superglue an “I’m out of touch” sticker to your forehead.

p.s. For the record, I think the “bullseye” complaint’s absurd. Someone’s got too much time on her hands and is dealing with some residual sexual repression. But for G-d’s sake, what company today publicizes its ignorance about the shifting communications landscape? And good for Amy (and/or her readers) for forwarding Target’s communique to the NYT.

One more thing: There seems to be some convo in Amy’s comments about how the stir over this one ad is muddling the message of objectification and sexualization of women in advertising and whatnot. Amy’s lesson in all this is the importance of picking your battles wisely. The Target ad was probably not the best *um* target seeing as how making a big deal out of a fully-clothed woman making snow angels makes the complaining party appear out of touch too.