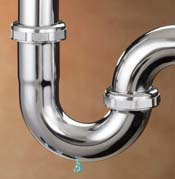 For those of you who are new to my little corner of the Interwebs, you should start here to get a sense of context.

But I came home from a jog today to find the second floor apartment door wide open. Inside, the plumber was standing on a ladder in the bathroom. Above him…a giant hole in the ceiling. And water streaming down from somewhere above.

Somewhere above = my apartment.

This isn’t a shock. They just fixed (for the third time) the pipes in my tub. I know because I still have the hole in the floor to show for it. But this new leak is allegedly coming from my sink. There’s some plan of attack now in place that appears to involve tackling the pipes from both above and below. Step one of said assault is currently underway. Step two’s on tap for this afternoon.

I’ve been warned to tread lightly should I need to use the facilities at some point today. Seems there’s a floor beam that’s been drilled through to accommodate the leaking pipes, and that’s now on the verge of a breakdown.

Safe to say, me too.

UPDATE: My downstairs neighbor just came home. They’ve ripped out his entire bathroom ceiling. From my “top down” perspective, I can see light through the thin tiling that’s still somewhat in place. The plumber and handyman say it’s ok to use the bathroom as long as I don’t step in the corner where the light’s coming through. What’s not ok by me is that my neighbor and I can now hear each other using the bathroom. Way too much information for my comfort.

One thought on “Speaking of Leaks”