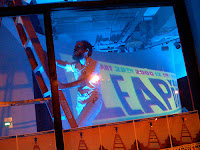 Miss Lindsay comes through once again with a quality installment of “Seriously Florida, WTF?” This is your Leap Year edition:

ORLANDO, Fla. — One Orlando man is celebrating leap year in a unique way.

Brian Feldman will be leaping from the top of a 12-foot-high ladder at Orlando City Hall – 366 times.

He’s expected to be there the entire day.

MIAMI – Police are responding in force at a Miami high school where a big fight broke out. Video from television news helicopters showed more than a dozen students being hauled away in handcuffs.

Miami Edison recently celebrated its move from a designation of an “F” or failing school to “D.” Last year, only 10 percent of students met reading standards. Less than a third met state math standards.