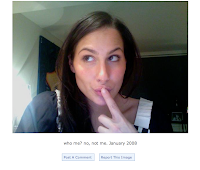 Oops. Maybe the call girl’s not going to make out after all:

According to a “Girls Gone Wild” press release, Dupre visited Miami in 2003 to celebrate her 18th birthday. After fighting with a friend and getting thrown out of her hotel, Dupre found a nearby “Girls Gone Wild” bus, the company said.

She signed legal papers and spent a full week on the bus, filming seven full-length tapes which included nudity and same-sex encounters, according to the company.

One thought on “Karma Gone Wild”