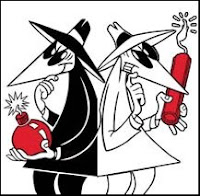 I posted a short note on Americablog last night poking fun at the fact that cable news networks seem to be labeling everyone a strategist these days. I got an email in response from one said strategist – Mark Walsh – who agreed that the whole political Spy vs Spy template has spiraled out of control. He gave me the heads up he was going to be on MSNBC this morning on a segment being called “Obamacans v. McCainocrats.” Just rolls off the tongue, doesn’t it?

The terms seem to originate from a Washington Times article published earlier this month but were unfortunately resurrected and injected back into the media lexicon today with this ridiculous Gallup poll alleging certain percentages of Democrats will vote for McCain if their preferred Democratic candidate doesn’t win the nomination:

Walsh made the only salient point in the pseudo-debate by noting that these numbers go right out the window once we have a confirmed candidate and the general gets underway. The anger being ginned up right now will die down in time, and Democrats who are truly Democrats won’t vote for 4 more years of the same.

The segment was short, but no one bothered to explain what Obamacans are or why they were “versus” McCainocrats. I’m assuming the term refers to Republicans supporting Obama. I’ll go out on a limb and offer a better – and easier to pronounce – name for those voters…