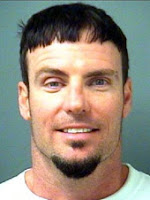 Miss Lindsay helps us usher in Friday with a “Seriously Florida, WTF?” retro 90’s edition (although I would argue this is equally a “Seriously? Vanilla Ice? contender too):

Rapper and recent reality TV star Vanilla Ice was arrested and booked into the Palm Beach County Jail on Thursday night on a charge of simple domestic battery after his wife called deputies to say her husband was hitting and kicking her.
(…)
It’s not the first time he has been arrested in South Florida. In 2004, he was booked into the Broward County Jail on a domestic battery charge, records show.

But wait, there’s more (emphasis mine):

In addition, a series of driving infractions – including driving with an expired license, driving 74 mph in a 45 mph zone and having illegally tinted car windows – culminated in a warrant for his arrest after he missed a court appearance.

He also was hit with $220 in impounding fees in 2004 when his pet wallaroo and goat escaped in Port St. Lucie and were picked up by animal control officers.

The wallaroo news actually spawned this About.com article profiling the animal. An excerpt:

They are curious and will bond quite nicely to their owners if hand raised and well socialized (and treated well). They can be playful and affectionate, but also mischevious. They can be taught to understand “no” and need firm corrections but physical punishment should never be used.