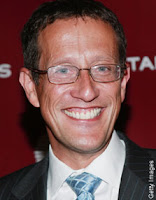 I don’t know Richard Quest personally. We never met. I’ve got no dog in the fight and no special insight. However, I am curious and truly baffled.

I cannot understand why CNN hasn’t said anything yet about Quest’s future with the network. As of this evening, his official bio‘s still online. He’s still “one of the most instantly recognizable members of the CNN team.” For those of you who need a little reminding, Quest was arrested at 3:40am Friday morning in Central Park with hard drugs on his person, a rope tied around his neck and his genitals, and a sex toy in his shoe. CNN had no comment when Quest was arrested. They declined to comment after he was arraigned. It’s been four days since then and still nothing.

Is CNN hoping people will just forget, and it will all just go away? That somehow when Quest shows back up on the air once again as one of the network’s “most recognizable” faces, that people won’t affiliate him with kinky sex and drug use?