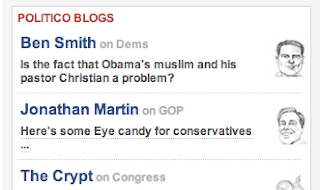 In case you can’t see it, Ben Smith’s headline reads:

Is the fact that Obama’s muslim and his pastor Christian a problem?

It’s a bit of a puzzle to me, though maybe it shouldn’t be, that some voters seem perfectly able to hold in their heads simultaneously the notion that Obama’s a Muslim and that his Christian pastor is a problem.

The whole write is problematic, but it’s the headline that makes my head spin. Read it. According to Ben Smith – who writes for an alleged news outlet – it’s a fact that Obama’s Muslim.

UPDATE: Apparently, I wasn’t the only one to spot this. Ben claims the headline wasn’t his fault. I don’t buy it. Know why? Because every journalist checks his headlines, and even if Smith didn’t write it, he should have had it taken offline as soon as he spotted it. He shouldn’t have needed Josh or anyone else to point it out.