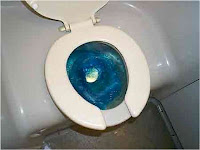 My brother told me about this story on the phone tonight, and I thought he was kidding.

Then he emailed me the link.

A New York City man is suing JetBlue Airways Corp. for more than $2 million because he says a pilot made him give up his seat to a flight attendant and sit on the toilet for more than three hours on a flight from California.

I’m guessing something’s been blown out of proportion here because I cannot imagine this scenario going down as described.

But if it did and this lawsuit’s legit, then Jet Blue’s going to be sh*t out of luck, and Mr. Mutlu will be one flush former flyer.