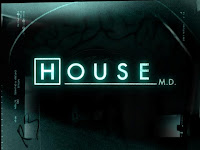 I’ve got too much spare time to watch too much bad TV, but there are a couple of shows I’d refuse to miss even if I did have a job.

House is one of them.

However, after last night, I’m traumatized. We dvr’ed Monday’s season finale b/c we were out in wine country blissfully disconnected from much of the planet. I’d heard no spoilers in the interim so last night, when we settled in to catch up, I had no idea what I was in for.

To say I cried like a small child in the midst of a department store meltdown would be an understatement.

Something about the way Amber’s death scene was shot and acted tugged on all the applicable girlie heart strings.

It wasn’t as bad as when Charlie drowned on Lost, but it came awfully close.