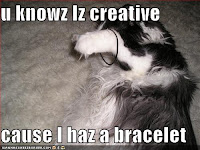 It’s going to be a big day in politics. MSNBC is reporting that according to the AP, Clinton’s planning to admit tonight that Obama has the nomination.

UPDATE: MSNBC is now reporting that Terry McAuliffe is saying the AP is wrong – that Clinton won’t admit Obama is the nominee tonight. Tough to tell if McAuliffe is telling the truth or just officially delusional. The plot thickens.

UPDATE 2: MSNBC is now quoting the “Clinton campaign” as saying the AP story is incorrect, and Senator Clinton will not concede tonight. Just flipped channels, and it seems CNN is doing the same backtracking as well.

It’ll be fascinating to see what actually plays out in the next 24 hours or so.

On the lighter side, I’m adding a Guilty Pleasure to the sidebar to replace “The Knife Show.” Please help me extend a warm welcome to I Can Haz Cheezburger. Just scrolling through the site daily is good for a chuckle.

You can also make your own Lolcat like I did with Emmy above. The caption’s a reference to this veteran Guilty Pleasure which is equally entertaining.