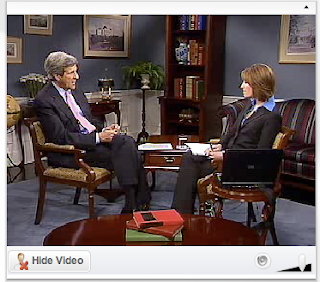 I interviewed Senator Kerry today as part of the Virtual Energy Forum and asked whether he’d be interested in the VP spot:

Jacki Schechner: It was inevitable we were going to get this question so I’m just going to throw it out there. But somebody says…her name is Lola…she says, “Would you consider running with Obama, and if so, what would you do to decrease the crisis with the Middle East and use diplomacy in reducing the economy[sic] and dependence on oil?”

Senator Kerry: Well, Lola, I’ll answer the first part of your question by saying that having made the selection for Vice President, it’s a good idea not to consider running with the person who’s choosing. Let them decide who they want to have run with them. So the answer is no, I’m sitting here like everybody else and watching with amusement while this process goes on.

Kerry: Only…the answer is probably not, but if the right definition were given to the job, then you’d be foolish not to say that you would think about it or consider it. And you’d be dishonest, likewise.

UPDATE: I should mention you can watch the full interactive interview by going to the Virtual Energy Forum website and signing up. It’s free, and once you’re logged in, you can find the Kerry and Gingrich sessions under the “Keynotes” tab up top.