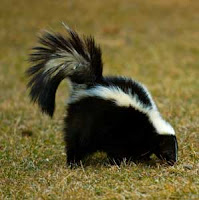 An uninvited passenger created a smelly situation on a plane in Miami. American Airlines Flight 915 from Miami to Bogota, Colombia, was delayed Wednesday night after a skunk was found in the back of the cargo hold, discharging its foul odor throughout the aircraft, airline officials said.

The skunk was discovered as workers were loading the plane. When crews tried to remove the skunk, the animal released its notorious rotten smell, American Airlines spokesman Tim Wagner said. No one was injured, but the odor filtered through the cabin and passengers were taken off the plane.

“I’m sure it smelled real bad in there,” he said.

The flight took off more than two hours late, in part because of bad weather in the area, Wagner said. The skunk was removed from the plane, but it was unclear where it was taken or how it got on the aircraft.