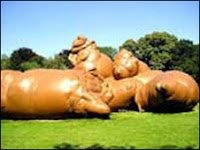 It’s been a ridiculous day. In no particular order:

We have hired a new advertising agency which means we’ve also had to not hire several other agencies. And by we, I mean I. I’ve learned something important about myself after having gone through this process. When given the option in the future of having to screen and select media firms or – say – have a tooth pulled, I’m going with dental surgery.

And finally, a big thank you to my brother who gave me my first good laugh today (see image):

A giant inflatable dog turd brought down a power line after being blown away from a Swiss museum.

The artwork, entitled Complex Shit, was carried 200 metres on the night of 31 July, reportedly breaking a greenhouse window before it landed again.

The sculpture, by American artist Paul McCarthy, was equipped with a safety system that should have deflated it.

The fake faeces has been returned and will remain on display at the Zentrum Paul Klee in Bern until October.

McCarthy is well known for his inflatable artworks, two of which – Blockhead and Daddies Bighead – were displayed outside the Tate Modern in London in 2003.

The Zentrum Paul Klee, which opened in 2005, houses a collection of about 4,000 works by the noted Swiss painter.