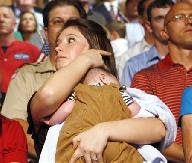 The 17-year-old daughter of Republican vice presidential candidate Sarah Palin is pregnant, Palin said on Monday in an announcement intended to knock down rumors by liberal bloggers that Palin faked her own pregnancy to cover up for her child.

Bristol Palin, one of Alaska Gov. Palin’s five children with her husband, Todd, is about five months pregnant and is going to keep the child and marry the father, the Palins said in a statement released by the campaign of Republican presidential candidate John McCain.

Way to go, Sarah and Todd! That’s some quality parenting right there.

“Bristol and the young man she will marry are going to realize very quickly the difficulties of raising a child, which is why they will have the love and support of our entire family.

So Sarah and Todd know how tough it is to raise a child yet they see no problem balancing her running for VP with caring for a special needs infant.