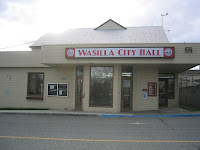 Something I learned during my time in Hagerstown, MD.

It’s always fun to check out the police blotter in a small town.

Here are a few selections from Saturday’s in Wasilla, Alaska (gives you a sense of the gravity of security issues facing a Mayor):

Aug. 25, Hermon Rd. and Parks Hwy.: Scott Lapiene, 46, Wasilla, had to drive arouind a semi driven by Rex Hutchison, 52, Fairbanks and struck the semi as as he was entering back into the lane.

Aug. 23: Barbara Gilhousen, 52, Anchorage, contacted for lying in the road. Arrested for disorderly conduct; no bail.

And this is my favorite from an earlier edition:

Aug. 9, W. Spruce Ave.: A female reported on Aug. 6 a suitcase and her dog stolen from her driveway. The suitcase contained various electronics, jewelry, personal items and cash. The dog is a 5-month old light brown male Chihuahua weighing 1-1.5 pounds, has a white spot on its head and chest, three or four white socks and is named “Magwoi,” but sometimes answers to “Baby.”