My Palin addiction has been tapered slightly due to circumstances beyond my control. My Internet connection at home is on the fritz, and Comcast can’t come fix it until Friday.

I know. I’m having withdrawal. It’s not pretty.

But here’s what we’ve learned so far today:

1. Palin’s a friend of Israel (emphasis mine):

Her thin record was underscored when the staunchly loyal Republican Jewish Coalition e-mailed its members evidence of her support for Israel: a video in which a small Israeli flag can be seen poking out from behind a drape.

“I think it speaks volumes that she keeps an Israeli flag on the wall of her office,” the group’s executive director, Matt Brooks, told Politico in an e-mail. “It clearly shows what’s in her heart.”

Palin also sat in on the following sermon by David Brickner – founder of Jews for Jesus – two weeks ago. More from Politico:

“Judgment is very real and we see it played out on the pages of the newspapers and on the television. It’s very real. When [Brickner’s son] was in Jerusalem he was there to witness some of that judgment, some of that conflict, when a Palestinian from East Jerusalem took a bulldozer and went plowing through a score of cars, killing numbers of people. Judgment — you can’t miss it.”

The boy’s mother, Sherry Johnston, said there had been no pressure put on her son to marry 17-year-old Bristol Palin and the two teens had made plans to wed before it was known she was pregnant.

“This is just a bonus,” Johnston said.

Let’s have another look at Levi: 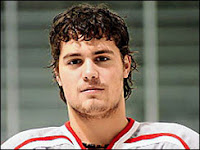 Levi Johnston, a high school hockey player for Wasilla High School, is not listed on the team roster for 2008-2009, and his mother wouldn’t say if he graduated. She said simply he’s no longer a student and any further information would have to come from him.

3. Palin not only has executive experience, but she considered herself overqualified for that Wasilla mayoral gig in the first place. From Laura McGann:

WASILLA, Alaska– I’m here at the Mat-Su Frontiersman’s offices flipping through their print archives. I was curious about what then-Mayor Sarah Palin said at the time about giving her top managers a loyalty test and eventually firing her chief of police.

I’m reading an article from October 1996, in which a reporter named Laura Mitchell Harris asks Palin about her intentions for a shake up. How would she effectively run a city without experienced leaders? “”It’s not rocket science,” Palin said, “It’s $6 million and 53 employees.”

Excellent. I cannot wait to hear her speak tonight.