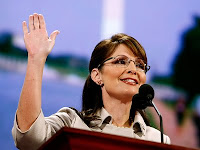 Seems the McCain campaign is now in the game of making up what Sarah Palin meant to say.

Jessica Yellin was up in Alaska today, and she did a piece on Palin and church. At the end of the report, Jessica read a “clarification” from the McCain campaign regarding Palin’s remarks that the war in Iraq is a task from G-d. What Palin said :

“Our national leaders are sending them out on a task that is from God,” she said. “That’s what we have to make sure that we’re praying for, that there is a plan and that plan is God’s plan.”

YELLIN: Now, Wolf, a member of the McCain campaign reached out to me to offer further context for Sarah Palin’s comments about the Iraq War and whether she believes that’s a plan from God. They say she meant she hoped it’s a plan from God, not that she was asserting it is. And they say this is a humble statement that any religious American will share, “the hope that our country’s actions are, indeed, righteous.

So this is how it’s going to be? Palin says one thing, and the McCain campaign decides she meant something entirely different. Why do I suspect this is only the beginning of the “Sarahfications” heading our way over the next two months?