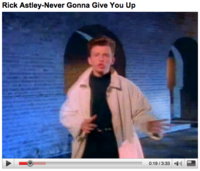 Surreal moment on CNN just now. Rick Sanchez* just finished a segment with two female bloggers. One I didn’t recognize at first glance on the left (but his saying she was a blogger on blogspot-dot-com instantly gave away the fact that neither he nor his producers know much about blogs) and Rachel Campos (former The Real World cast member) on the right. Having heard Rachel the other day, I figured there wasn’t much worth listening to. But then my curiousity got the better of me, and I unmuted just in time to hear the following:

Rick: Some would say this is just a distraction. So who loses? Who loses when we don’t talk about the issues? Quick. 10 seconds. And I want to hear from both of you.

The topic was the “lipstick on a pig” absurdity.

See where this is going?

CNN’s got such an opportunity right now to concentrate on the real issues at hand. Now would be an excellent time to stop playing follow the leader, stop glomming onto the latest McCain campaign distraction, and start dissecting the candidates’ platforms and plans. Not sexy but essential.

Instead of asking if what you’re covering is a waste of time, just stop covering it.

*Rick and I worked together at WSVN in Miami in the ’90s, and he did a good deed for me back in the day so my post’s not meant to be a personal slam but rather a professional observation coupled with a little constructive criticism aimed at CNN.