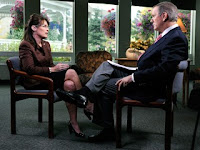 I was on the treadmill last night watching Gibson interview Palin on World News Tonight. Good thing, because I probably would have hit something had I not already been in the midst of expending excess energy.

Juxtapose Palin’s answers on changing economic policy to Miss Teen South Carolina‘s bizarre, pointless rant on “the Iraq” and tell me you don’t see the similarity. Palin speaks in circles saying a whole lot of nothing. Here’s just one part of that segment:

Taxes, of course, I think is one of the most important things that government can obviously control and to help with this issue.

GIBSON: What you said to me at the beginning I don’t think anybody in the Bush administration would disagree with. What do you change in the Bush economic plans?

PALIN: We have got to make sure that we reform the oversight, also, of the agencies, including the quasi-government agencies, like Freddie and Fannie, those things that have created an atmosphere here in America where people are fearful of losing their homes.

The second segment they showed was Gibson asking a series of questions about issues like Roe v. Wade, homosexuality, the Second Amendment, and others. And herein lay the most frustrating part for me. Palin argued a politician’s personal beliefs don’t necessarily guide how she will govern. This may be true for Sarah Palin considering she has sufficiently proven to me she is a completely empty vessel devoid of any hint of self-awareness or decency. She is a puppet content to sacrifice the safety of our nation (and if you think putting her a heartbeat away from the Presidency is anything short of reckless, you’ve gone mad) for personal ambition, and for that I absolutely despise her. You know you’re thoroughly unqualified? You say thanks but no thanks (a phrase she clearly knows how to repeat, having heard her use it endlessly in lying about her stance on the Bridge to Nowhere). But instead, this woman is content to let the Republican machine exploit her gender and her family for selfish personal gain.

Playing with the nation the way she has. Cramming on foreign and domestic policy as if she were prepping for a high school civics test. Repeating the same stump speech in city after city, knowing full well she’s got nothing else up her sleeve until someone tells her what comes next. All criminal. All abusive. All unacceptable and unforgivable.

I blame her. I blame McCain. I blame the conservative strategists and pundits who go on TV and lie through their teeth knowing Sarah Plain is grossly incompetent. I blame the media who cover bullsh*t faux outrage over twisted interpretations of colloquial phrases. And I am fully prepared to blame every Democrat and every decent Independent or even Republican with a brain who doesn’t pick up his or her lazy ass and vote against Sarah Palin and her charade on November 4th.

I’m sitting down now to watch the full 20/20 from last night. John doesn’t even let me talk about Palin anymore – let alone watch news about her – in his presence. It gets him too worked up. The man has better discipline than I. I recorded the show so I could see the train wreck in its entirety.

I’ll be back to weigh in when it’s done.

UPDATE: Turns out there was little new I hadn’t seen or heard in excerpts before. And btw, before anyone goes after me for suggesting no one would turn down the VP spot if asked, I would whole-heartedly disagree. In a circumstance so blatantly manipulative, someone with a soul and a little dignity would have at least hesitated. Not Palin. She told Gibson she didn’t even blink.

One thought on “Getting It Out There”