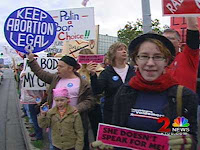 More than 1,000 rally against Palin

Mudflats backs it up:

Never, have I seen anything like it in my 17 and a half years living in Anchorage. The organizers had someone walk the rally with a counter, and they clicked off well over 1400 people (not including the 90 counter-demonstrators). This was the biggest political rally ever, in the history of the state. I was absolutely stunned. The second most amazing thing is how many people honked and gave the thumbs up as they drove by. And even those that didn’t honk looked wide-eyed and awe-struck at the huge crowd that was growing by the minute. This just doesn’t happen here.

So, if you’ve been doing the math… Yes. The Alaska Women Reject Palin rally was significantly bigger than Palin’s rally that got all the national media coverage! So take heart, sit back, and enjoy the photo gallery. Feel free to spread the pictures around (links are appreciated) to anyone who needs to know that Sarah Palin most definitely does not speak for all Alaskans. The citizens of Alaska, who know her best, have things to say.

UPDATE: Well, this is quite the write from today’s NYT. An excerpt:

Ms. Palin entered the 2006 primary for governor as a formidable candidate.

In the middle of the primary, a conservative columnist in the state, Paul Jenkins, unearthed e-mail messages showing that Ms. Palin had conducted campaign business from the mayor’s office. Ms. Palin handled the crisis with a street fighter’s guile.

“I told her it looks like she did the same thing that Randy Ruedrich did,” Mr. Jenkins recalled. “And she said, ‘Yeah, what I did was wrong.’ ”

Mr. Jenkins hung up and decided to forgo writing about it. His phone rang soon after.

Mr. Jenkins said a reporter from Fairbanks, reading from a Palin news release, demanded to know why he was “smearing” her. “Now I look at her and think: ‘Man, you’re slick,’ ” he said.

Safe to say my gut instincts about this woman have proven absolutely true.