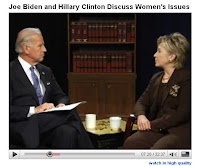 An update on the Biden/Clinton webcast in the previous post. A great health care clip starts at 6:34 (goes to 8:42). Biden asks about Obama’s plan and pre-existing conditions. Clinton’s answer follows:

Clinton:…One thing insurance companies love to do is to deny coverage whether because of some pre-existing condition, whether it’s cancer or sinus infections or yes, pregnancy. And in the individual market, if you’re pregnant and trying to get insurance, they can deny you coverage. We know that’s wrong, and Senator Obama believes the insurance companies should not be allowed to only cover people who have never been sick, never been pregnant, never had a child. He certainly believes insurance companies should not be allowed to deny coverage based on these pre-existing conditions like pregnancy, for goodness sake. So his plan would prohibit insurance companies from denying people coverage based on pre-existing conditions, and he would create new affordable options for people who have to get their insurance in the individual market. That is a very important difference between Senator Obama’s plan and Senator McCain’s. Senator McCain’s plan would actually make health care harder to reach for more people. His plan would not only do away with group insurance, which is the way most people get insurance today, he would give people a tax credit to purchase insurance that wouldn’t even cover the most basic cost of insurance. His message is, “You’re on your own” when it comes to health insurance.

Biden: By the way, John does do one thing. He wants to tax – he wants to tax as income – the health care benefits you get through your employer.

Clinton: Yes. Right. Which would just destroy the employer-based system