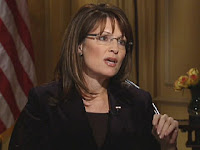 Morning. I’ve been contributing to AMERICAblog a lot less recently (ever since I picked up this thing called a job), but I got so frustrated yesterday, I felt the need to share in a spot I hear the Obama camp actually reads. Here’s that post.

In contrast, I did get some good news last night. Seems the Women Against Sarah Palin movement is picking up some serious steam, and at least one contingent (It appears there are several, and I not sure yet which is the biggest. It’s a good problem to have.) will be getting help from a stellar web development/organizing team and experts in pushing progressive causes into the spotlight. I’m looking forward to seeing what emerges.

There’s a lot of McCain/Palin news online today, including McCain’s ability to piss off Spain in one fell swoop. Sarah Palin told Sean Hannity she thought the Tina Fey skit was hilarious. Didn’t hear a word of it (not kidding), but thought it was just spot on (emphases mine):

HANNITY: One last question that I didn’t ask you: Did you watch Tina Fey on “Saturday Night Live”?

PALIN: I watched with the volume all the way down and I thought it was hilarious, she was spot on.

HANNITY: Do you think you could play her one day?

PALIN: Oh absolutely. It was hilarious. Again, I didn’t hear a word she said, but the visual was spot on.

HANNITY: Has anyone ever said that before? There’s a similarity…

PALIN: They’ve been saying that for years up in Alaska. In fact, I dressed up as Tina Fey once for Halloween. We’ve been doing that before Tina Fey’s being doing that.

Don’t pull a Palin. Watch it with sound: