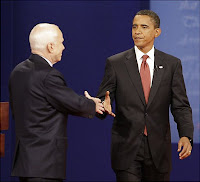 I was going to title my debate reaction post “Storm” as in “the calm before the…”, but it’s been 15 hours, and I’m more mellow now.

I think Obama did well. Very well. I would have liked to have seen him nail McCain on a few more specifics (such as McCain’s having voted against the veterans he swears he’ll help and the fact that McCain’s $5000 tax credit for family health insurance won’t buy diddly-squat in the individual market when family premiums are now up to more than $12,500). But all in all, I was pleased.

I’m clearly biased, but I thought McCain came across as cranky and surly, and I couldn’t help but think, “Ok, Grandpa, enough with the stories of the olden days.” I don’t think the references to the past did him any favors. All it did was remind me of his age over and over again.

And he can’t really play the experience card now that he’s got Palin on the ticket.

Speaking of my favorite joke of a VP candidate, rumor online is that McCain’s camp is freaking out about Palin and the VP debate Thursday:

Capitol Hill sources are telling me that senior McCain people
are more than concerned about Palin.

The campaign has held a mock debate and a mock press conference; both are being described as “disastrous.” One senior McCain aide was quoted as saying, “What are we going to do?” The McCain people want to move this first debate to some later, undetermined date, possibly never. People on the inside are saying the Alaska Governor is “clueless.”

October 2nd also happens to be my birthday.

How awesome a birthday present is that night going to be?

3 thoughts on “He Who Wore The Flag Pin Won”