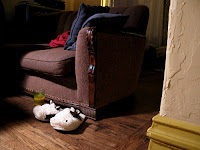 It’s been a busy day here at the home office.

I’m now finally winding down and settling in with my tissues and tea to watch the debate. There are so many things to say about Palin and McCain and the way they’re behaving. I not only fear they’re stirring up something awful by poking the racist underbelly of society and encouraging it to emerge from the shadows with a promise of acceptance if not adulation, but I also fear for the aftermath of this election should their deranged strategy somehow succeed. Who wants to live in a country where this kind of divisiveness prevails?

On a separate note, I’ll be keeping an ear out for health care related questions tonight. Here’s a primer so you can follow along at home:

What To Watch For In Health Care Talk Tonight