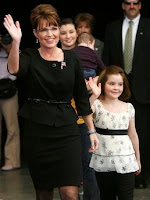 I love it. Palin’s in a pickle…again:

Read the whole thing and send it around to everyone you know. Especially this part:

In the amended reports, Palin added phrases such as “First Family attending” and “First Family invited” to explain the girls’ attendance.

“The governor said, ‘I want the purpose and the reason for this travel to be clear,'” said Linda Perez, state director of administrative services.

In October 2007, Palin brought daughter Bristol along on a trip to New York for a women’s leadership conference. Plane tickets from Anchorage to La Guardia Airport for $1,385.11 were billed to the state, records show, and mother and daughter shared a room for four nights at the $707.29-per-night Essex House hotel, which overlooks Central Park.

…Griffin, the campaign spokesman, said he believes someone with the event personally sent an e-mail to Bristol inviting her, but he did not have it to provide.

Nope. No abuse of power. No extraneous spending. Move along. Nothing to see here.