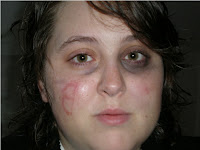 How did I miss this one?

Todd told police she was withdrawing money just before 9 p.m. Wednesday when a man approached her from behind, put a knife to her neck and demanded money, police said. She said she gave him $60.

The robber then noticed the bumper sticker, punched her in the back of the head, knocked her down and used the knife to carve a “B” on the right side of her face, the woman told police.

It was unclear what the “B” was meant to symbolize, Richard said.

So we are to believe a McCain volunteer (who draws like a 4th grader, btw) is attacked by a politically inclined mugger with an extremely steady hand and a skill for lightly etching backwards letters and then refuses medical treatment but takes a picture of herself and circulates it online?

You know your made-up assault has totally jumped the shark when even Michelle Malkin calls bullsh*t.