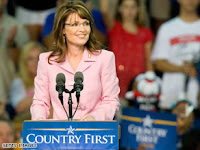 I love these reports of Palin starting to wing it:

McCain sources say Palin has gone off-message several times, and they privately wonder whether the incidents were deliberate. They cited an instance in which she labeled robocalls — recorded messages often used to attack a candidate’s opponent — “irritating” even as the campaign defended their use. Also, they pointed to her telling reporters she disagreed with the campaign’s decision to pull out of Michigan.

A second McCain source says she appears to be looking out for herself more than the McCain campaign.

“She is a diva. She takes no advice from anyone,” this McCain adviser said. “She does not have any relationships of trust with any of us, her family or anyone else.

“Also, she is playing for her own future and sees herself as the next leader of the party. Remember: Divas trust only unto themselves, as they see themselves as the beginning and end of all wisdom.”

The McCain campaign made its own bed on this one. It’s a pleasure to watch them toss and turn.