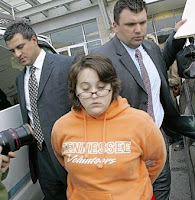 Oh, this is priceless. From BoingBoing via John, according to the Pittsburgh Post-Gazette:

About a month earlier, he said, Ms. Todd sent an e-mail to the Ron Paul group saying her tires were slashed and that campaign paraphernalia had been stolen from her car because she supported Mr. Paul.

Seems Palin’s not the only woman the McCain campaign failed to vet before pushing her story out to the press.