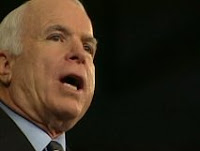 This says it all. From the AP:

Democratic presidential candidate Barack Obama plunked down $4 million for a campaign-closing television ad Wednesday night and summoned voters to “choose hope over fear and unity over division” in Tuesday’s election. Republican John McCain derided the event as a “gauzy, feel-good commercial,” paid for with broken promises.

Obama lifts you up. McCain drags you down.