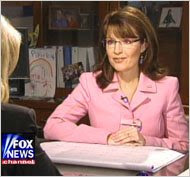 Ms. Palin directed most of her media criticism at liberal bloggers, whom she twice called, “those bloggers in their parents’ basement just talkin’ garbage.”

John points us to Jane who nails it. Those trash talkin’ basement dwellers include:

Arianna Huffington graduated from Cambridge University with an M.A. in economics. At 21, she became president of the famed debating society, the Cambridge Union. She is a bestselling author who ran for Governor of California.

Markos Moulitsas served in the U.S. Army from 1989 through 1992. He earned two bachelor degrees at Northern Illinois University (1992-1996), where he majored in Philosophy, Journalism, and Political Science. He earned a J.D. at Boston University School of Law.

Duncan Black earned a Ph.D. in economics from Brown University in 1999. He has worked at the London School of Economics, the Université catholique de Louvain, the University of California, Irvine, and Bryn Mawr College…

There are many, many more, including John and Jane themselves. Intelligent, accomplished, well-educated, worldly, well-spoken, curious, and interesting people who collectively speak to millions online everyday.

Seems Sarah knows as much about the Internet as she does about Africa.