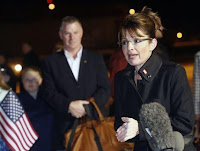 Last night, John and I were talking about the way Palin speaks and my frustration with the general media failure in calling her out on her bullsh*t. He suggested that perhaps the reason why reporters have trouble pushing back on Palin is that they have NO CLUE what she’s talking about. By the time she finishes answering a question, the interviewer is so thoroughly baffled by what his ears just absorbed but his brain can’t translate that he simply surrenders and moves on.

It doesn’t excuse the abysmal segments that have been masquerading as news reports lately, but it does offer a creative explanation for the apparent epidemic of missing follow-through.

Seems Daniel Larison has come to a similar conclusion.