“You have to seize on these opportunities in history to do something big,” said Jacki Schechner, national communications director for Health Care for America Now.

On Tuesday, the health care advocacy group launched a TV advertising campaign prodding the incoming administration and the new Congress to act on health care, even though Obama won’t be inaugurated for two months.

“I’d like to think we’re on the right track, but it doesn’t hurt to poke a little and say, ‘Hey, remember, we’re here,'” Schechner said. “We can’t wait any longer.”

Many of the groups — including those pushing health care expansions — are asking Obama to deliver on campaign promises that he and his aides say he’s intent on keeping.

In case you missed it, here’s the ad again: 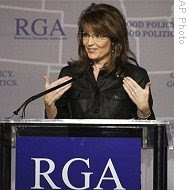 Via Andrew, a compelling explanation of why the mysterious circumstances surrounding Trig Palin’s birth are still worth exploring:

The single specific piece of information that we have that has caused the most scrutiny of her birth saga is that she traveled back from Texas to Alaska on April 17th leaking amniotic fluid. Yet, she has never once, as far as I can tell, been asked pointed questions about the very real specifics of this. It would be a bit like someone calling in sick at work because he has cut his arm very badly, yet never showing any physical signs – like blood, or stitches, or going to the doctor, that it ever happened, yet being defensive about having to “prove” it.

Read the whole thing, and then tell me you aren’t just the slightest bit suspicious.

My friend Joe has the quote of the day:

I can forgive John McCain for a lot of his campaign rhetoric. But, I don’t think I’ll ever forgive him for inflicting Palin on us.

My brother had a brilliant idea last night. Name that book. If you could title Palin’s tell all, what would it be? 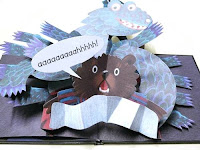 Is it going to be a pop-up book?

Literary agents are queueing up to sign her to a book deal that could earn her up to $7m.

Palin can’t speak. She clearly doesn’t read. What makes anyone think she can write?

Once again, I must offer up apologies for being a lousy blogtender today. I had a doctor’s appointment this morning (everything’s fine), but that sucked up a good chunk of time, and now I’m still catching up at work.

But I did want to just check in and say hello. I spent much of my weekend catching up on bad TV and reading “Eat Pray Love” which, frankly, seemed a lot cheesier than it’s turning out to be. Oprah’s endorsements have the exact opposite of their intended effect on me. I generally avoid her book club recommendations like the plague. But I figured enough time had passed that it would be alright to scoop up a copy…just this once.

I haven’t finished it yet, but I like it so far. A lot. It’s soothing in light of how tumultuous everything’s been the past few months, and though I’m just starting to wade into the Love portion of the novel, it’s been sufficiently engaging thus far to warrant a hearty thumbs-up recommendation.

Assuming I’m not the only one who hasn’t read it, of course. I realize I’m so behind on my reading that my being way out of the loop on this one is entirely possible.

Oh, I so need the Friday.

Here’s a little poem of the week for you. Updated by Bond…James Bond.

And in the interest of reminding you to check out John’s column this Sunday, I will say I found it particularly interesting and felt smarter and more well-informed after reading it. (The early peek is the perk of being the self-assigned editor.)

Have a great weekend. 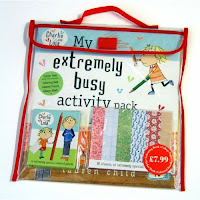 There are no words to properly explain how busy I have been the past 24 hours or so.

The good news is we had a very successful press call today with 4 new Members of Congress who plan to make health care a top priority in 2009. You can read the full release online here. Here’s a teaser:

“As a cancer survivor, I speak about health care with knowledge gleaned from the sharp end of a chemotherapy needle,” said Rep.-elect Eric Massa (D-NY). “Organizations like Health Care for America Now are at the forefront of a grassroots movement that is saying, ‘yes, we do own the vote, and yes we can change this country.’ The economy we’re in will mandate the necessity of taking bold steps, and I am willing to be very aggressive in making health care a part of the solution.”

Shhhh. Don’t tell anyone…But I kind of like my job.

Speaking of job, how the hell does Richard Quest still have one?

Mike Duncan – the head of the RNC – is on CNN right now trying to explain away a fundraising letter accusing Democrats of trying to “steal the election.” He says he wants to make sure no one’s got a hand on the scale, especially in Minnesota where the Secretary of State is highly partisan.

Instantly, my mind went to Florida 2000, Katherine Harris, and a Republican I know who bragged about being responsible for tossing out some “questionable” Democratic votes.

Just because you’re lying, cheating scum doesn’t mean everyone else is. But you are more inclined to suspect the worst if you know you’ve been able to pull it off before.

Boomer was a precious dog, and Joe loved him very much. He spoiled him rotten and with good reason. They were true companions.

This post is my small way of letting Joe know he’s on my mind.