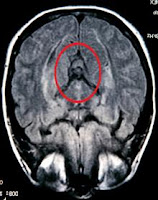 Not wanting to relinquish ownership of the regular feature she pioneered, Miss Lindsay comes through with a gem. It’s “Seriously Florida, WTF?” Christmas Miracle edition:

FORT PIERCE — A 42-year-old woman without insurance and mounting medical bills plans to sell an MRI scan of her brain in which the image of the Virgin Mary seems to appear.

Pamela Latrimore has been sick for years with cancer, arthritis and a series of serious ailments she blames on a childhood in Jacksonville, Ark., a place that has been investigated by the U.S. government for possible dioxin exposure. Dioxin is a toxic chemical linked to a variety illnesses including cancer and liver problems.

In 2002, Latrimore had an MRI of her brain done and the results were stashed in her thick pile of medical records. Her sister-in-law looked at the sheet recently and pointed out what appeared to be the image of the Virgin Mary.

Having seen where other supposed images of Mary or other religious icons were sold for thousands of dollars, Latrimore plans to post the MRI scan on eBay, the online auction site. She hopes to earn enough money to pay off some of the medical bills she and her contractor husband cannot afford.