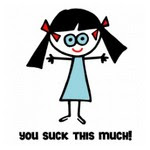 Well, it all seems to be coming full circle, doesn’t it?

I’m still not ready to dish the detailed dirt on what went down when I left CNN, but let’s just say the first half (and only the first half) of this news makes me downright giddy.

I know it’s unbecoming to gloat, but it’s my blog, and I’ve earned the right.

As an aside, the only downside to this news is now the chaff could possibly be mentioned in the same sentence as the wheat. Know there is a HUGE difference between the people let go last week and this dismissal. HUGE.