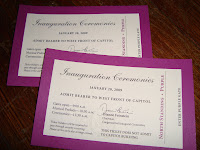 We went to The Huffington Post party last night at the Newseum. We saw Val Kilmer, Ron Howard, Diane Von Furstenberg (whom John recognized and named before I even saw her appear), John Cusack, Isaiah Washington, The Jonas Brothers, Richard Schiff, and Kevin Johnson. Sting was incredible but only played a couple of songs. It was a fun night. Crowded and supertough to get a beverage, but all in all, not a bad soiree.

This morning was a different story. We had tickets to the Inauguration (thanks to John Aravosis who unfortunately is fighting a flu and couldn’t go). We hopped on the Metro and expected smooth sailing down to Judiciary Square considering there was no one around by the time we got on the train. However, one stop later, the conductor announced a customer had been hit on the tracks at Gallery Place and the train wouldn’t be going any further than two stops from where we were. So we got out at Dupont Circle and started walking. We walked for more than an hour (we think about three miles) towards where we expected the purple gate entrance to be.

However, there were no signs, no volunteers, and no indication of where ticket-holders were supposed to go. There were massive crowds and arbitrary pseudo-lines. People with purple tickets like us were blending into large groups of just general revelers, and without any official organizers in sight, it started to look increasingly unlikely we were going to be able to get in. 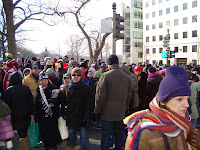 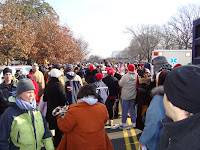 I managed to take a couple of pictures (click on the images to see them larger) before we made an executive decision to turn back around and head home in time to catch the ceremony and speech on TV from the comfort of our warm and cozy couch.

What we did notice in the couple of hours we spent downtown was the enthusiasm and general good spirit of the masses. It was cold, and there were a lot of people packed into tight spaces, and yet everyone seemed to be staying upbeat and positive. There is definitely a spirit of hope and optimism in the air here in D.C.