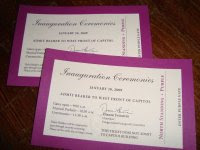 Via David at TPM, an apology from the JIC:

Many of the problems appear to have been due to the unprecedented crowds, and a huge flow of unticketed people toward the U.S. Capitol and into the 3rd Street Tunnel from the National Mall, after it had reached capacity very early that morning and was closed to additional unticketed entries.

Let’s not leave out the total lack of signage and personnel. I don’t believe organizers couldn’t have anticipated and prepared for record crowds since everyone’s been talking about them for weeks. John suggested yesterday that authorities should have had an outer barrier that only let ticket-holders into a certain area and then had a second barrier to do security screenings once ticket-holders had been able to move past the general masses. At least that way when the Mall hit capacity, a “huge flow” wouldn’t have mattered because it would have flowed right around the cordoned off areas.

Again, I’m not all that bothered personally because our tickets were a last-minute pleasant surprise, but if I had flown across the country or had gotten my tickets as a thank you for hard work invested in getting Obama elected, I would have been devastated by what appeared to be a complete disregard for making sure ticket-holders got access to where they were supposed to be.