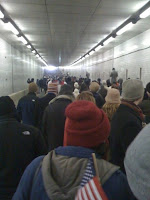 So it turns out our Inauguration ticket experience was the norm rather than the exception. Here are some examples of other people’s experiences trying to get into the event.

We actually headed down into this very same tunnel and walked quite a ways before finding a cop who told us to go in a different – albeit just as useless – direction. As we were exiting the tunnel, John had the foresight to say to me, “You know, if we’re going to get stuck somewhere, I’d rather it be outside than in a tunnel. This is eerie. Like a bad zombie movie.”

I know the magic of the moment will undoubtedly overshadow any of the negativity, but there is something to be said for getting people all hyped up about having Inauguration tickets and then stranding them on street corners and in tunnels so they don’t just not get in, but they get nothing.

I feel really lucky that John and I gave up when we did and made it home in time to witness history, but in solidarity with those who decided to stick it out, I’m linking to other accounts of the morning.

The Washington Post Inauguration Watch has police reaction tonight, and I, too, believe they’re not telling the truth. Scroll through the comments. This wasn’t just a case of too many tickets. It was a case of bad logistical planning and no personnel. The cops had absolutely no command of the scene. Two police officers sent us in two different directions within 5 minutes of one another. It was chaos, and an apology rather than an excuse would probably be more appropriate and somewhat appreciated.