Obama mentioned health IT as an urgent investment during his big speech today. He said we will have computerized medical records within 5 years, and the move will reduce errors and save lives.

I just stumbled on the BETA from my Gmail. Here’s another screengrab: 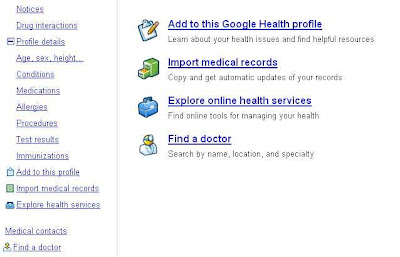 Here’s a WSJ write on Google Health and its competitor – Microsoft Health Vault:

Google Health (google.com/health) and Microsoft Health Vault (healthvault.com): The rival sites offer a number of health-management tools. Google’s site, for instance, allows users to refill prescriptions online at participating local drugstores and to seek a second opinion on a medical question via an online consulting service from partner The Cleveland Clinic (for a $565 fee). Microsoft’s features include programs that can link to home devices such as a blood-glucose meter or a heart-rate monitor to track readings and provide them to physicians.

But the sites’ main benefit is that it allows individuals and families to create their own free online medical records, and to share these with physicians if they choose. Despite concerns about security and privacy, there is something pretty appealing about having your medical history, medication lists and lab reports on a secure Web site that you can get to in an emergency, particularly since most doctors still haven’t switched to electronic medical records in their offices. But for backup, I still advise my mother’s strategy: keeping paper copies of everything.

And finally, more good advice from the same write:

While many health Web sites have enriched their offerings, privacy issues remain a concern as users are able to enter personal information and receive customized alerts and health messages. Consumers should read the privacy policies of the sites carefully and be sure to opt out of any features that share personal information with marketers if they don’t want to be contacted.

Think Progress’ Wonkroom has got a good resource out today debunking some of the conservative arguments against comprehensive health care reform under President-elect Obama.

They tackle 10 myths. Here’s a sample:

1. Health care reform will limit patient choice. In an editorial published in the Washington Post, Rep. Michael Burgess (R-TX) argued that what health care reform really “means is limiting freedom – the freedom to choose a doctor, to take your health care with you when you switch jobs, to make personal medical decisions.” [Washington Times, 11/19/2008]

REALITY: Progressive reforms would provide more choice, not less. Under progressive proposals, Americans will have the choice to keep the employer plan they currently have or buy an affordable plan from the national insurance exchange. Individuals and small businesses will be able to “compare private coverage options and a public plan and to purchase the policy that would work best for them.” [Wonk Room, 11/12/2008]

If you feel so inclined, pass the post around. It’s worth getting the truth out there before the lies and talking points take hold and are harder to pry loose. 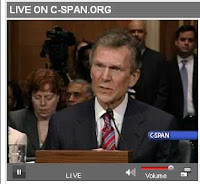 My apologies for neglecting this little neck of the web for the past few days. It’s been a combo of getting readjusted to work, a dead home computer, and residual vacation jetlag/sleeplessness due in large part to a cat determined to punish me for leaving her for a week. She’s got the relentless 4am meow down to a science.

Anyway, right now I’m watching Sen. Daschle’s confirmation hearing online here. If you’ve got some time, tune it. Should be interesting to see what comes from Republicans in this one.

Also, it’s worth taking a moment to read Robert Pear’s write today in the NYT. The arguments against the public plan option are laughable. You’ve got to ask yourself why private insurers are afraid of a little competition. If they’re truly doing their best and are on the up-and-up, then it shouldn’t affect them one bit to have to compete with a public plan. And yet, they protest…

p.s. The Mac’s back up and running now so I should be able to upload vacation photos in the next 24/48. It needed a ridiculous amount of work including a new battery and a new casing in addition to a revamp of the System folder which apparently threw up and shut down when I tried to download a security update. Here’s hoping the fixes stick for a while.

We flew back to the States yesterday, and after an expected delay at JFK, we are now home in DC safe and sound. Spain was amazing. I’ve got pictures and video and tons of good stories, but unfortunately, they’re going to have to wait a couple of days.

My Macbook died again last night, and until I can get out to the Apple store (again), I won’t have a chance to tend to the blog. Work time is all work now. I’m currently sifting through hundreds of emails and slowly but surely returning missed calls.

But I promise once my home system is back online, you’ll get the full Debrief de Espana.

Meanwhile, I can justify blogging from the office if I promote HCAN’s print ad out today. It’s in The Hill, Roll Call, and Politico, and it thanks President-elect Obama, Vice President-elect Joe Biden and the 170 Members of Congress who support the HCAN principles. Some HCAN staffers went up to the Hill today to thank Members in person. Here’s Jason’s account plus some interesting news about why health care spending slowed in 2007. Jason explains:

The slowdown was caused primarily by two factors:

1. A drop in prescription drug spending, with much more spent on lower cost generics as opposed to brand-name drugs.