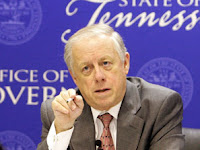 “Anybody who’s got some real scars and experience is going to have their detractors,” the governor said Monday in an interview with The Wall Street Journal. “People at the White House are smart enough to be able to assess that.” And he took a swipe at his opponents, saying that “advocacy groups don’t matter nearly as much as the pharmaceutical groups, the hospitals, the doctors’ groups. There’s a lot of very powerful interest groups that will play in this thing.”

UPDATE: In case you’re still unclear as to why Bredesen is dangerous, Ezra explains.