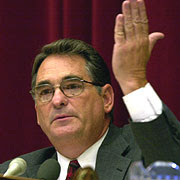 Why partner with PhRMA?

“Retiring Rep. Billy Tauzin, R-La., who stepped down earlier this year as chairman of the House committee that regulates the pharmaceutical industry, will become the new president and CEO of the drug industry’s top lobbying group…Public Citizen, a non-profit consumer advocacy group, called Tauzin’s hiring ‘yet another example of how public service is leading to private riches.’ Tauzin gets a pay package reportedly worth at least $2 million a year, making him one of the highest-paid lobbyists in Washington.” “Tauzin switches sides from drug industry overseer to lobbyist,” USA Today, December 15, 2004.. http://www.usatoday.com/money/industries/health/drugs/2004-12-
15-drugs-usat_x.htm