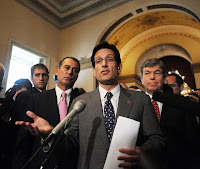 Howard Dean weighs in on the right wing attacks on CER and how they are all about Republicans putting politics before people. Via HuffPo:

This claptrap is really about the far right laying the ground work for a far greater and more sustained attack on the Democrats’ attempt to fix our health care system. As we move forward with the American people to finally fulfill the promise of Harry Truman, who over sixty years ago suggested that every American ought to have a reasonable health care plan, we will rely on the voters to remind the right wing that change is what we promised, and change is what we will deliver.

Their opposition is about politics asure[sic] that the new administration and the Congress do not get a “win.”

Unfortunately, Newt won that fight. We didn’t get health care reform. And look where we are now.

So now would be an excellent time not to let that happen again.