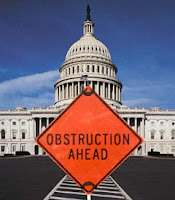 Bill Kristol is at it again. Today in the WaPo:

Conservatives can’t win politically right now. But they can raise doubts, they can point out other issues that we can’t ignore (especially in national security and foreign policy), they can pick other fights — and they can try in any way possible to break Obama’s momentum. Only if this happens will conservatives be able to get a hearing for their (compelling, in my view) arguments against big-government, liberal-nanny-state social engineering — and for their preferred alternatives.

December 2, 1993 – Leading conservative operative William Kristol privately circulates a strategy document to Republicans in Congress. Kristol writes that congressional Republicans should work to “kill” — not amend — the Clinton plan because it presents a real danger to the Republican future: Its passage will give the Democrats a lock on the crucial middle-class vote and revive the reputation of the party. Nearly a full year before Republicans will unite behind the “Contract With America,” Kristol has provided the rationale and the steel for them to achieve their aims of winning control of Congress and becoming America’s majority party. Killing health care will serve both ends. The timing of the memo dovetails with a growing private consensus among Republicans that all-out opposition to the Clinton plan is in their best political interest. Until the memo surfaces, most opponents prefer behind-the-scenes warfare largely shielded from public view. The boldness of Kristol’s strategy signals a new turn in the battle.