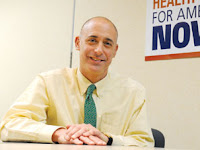 Health Care for America Now grabbed the political spotlight by scoring endorsements of its principles from Obama, Vice President Joe Biden and 188 members of Congress who, according to the group, believe that “quality, affordable health care for all in America should be at the top of the legislative agenda for the new president and Congress in 2009.”

POLITICO caught up with Kirsch last week during a break in the group’s training session. Here are excerpts of the interview.

What do you think of Obama’s address and budget rollout?

He’s made it clear to all the naysayers that he’s serious about winning a guarantee of quality, affordable coverage for everyone this year, and he’s putting his money where his mouth is. It’s a promise that we believe he’s made for a while, and I think the political establishment in Washington finally realizes he’s serious.

What’s the biggest asset you can bring to bear to help pass health care reform?

First of all, that the heart and soul of Health Care for America Now is outside the Beltway, with organizers in 41 states who are mobilizing more than 600 state-based organizations and thousands of activists in each state. And then you combine that with a coalition that represents huge, powerful organizations with 30 million members and a big presence inside the Beltway.

We’re also mentioned in another Politico write today as the counter to a new anti-reform group headed by a guy named Richard Scott:

Some on the left have already formed their own group, Health Care for America Now, a coalition to push for guaranteed health care for all Americans. The group has a $35 million budget this year and is planning on spending half of that on advertising in addition to holding grass-roots events in Washington, and in the districts of key members of Congress.

“We are fully operational, organized, and mobilized to make sure Congress supports the president’s plan to win quality, affordable health care for all this year,” said Jacki Schechner, the group’s communications director

Pro-health reform activists also have begun circulating information in an effort to discredit Scott, a move that underscores the huge stakes involved in the issue.

According to a 2000 article in Forbes, Scott was forced to resign as head of what became known as Columbia/HCA after fraud charges against the massive health care company in 1997. He was replaced by Thomas Frist Jr., the original founder of HCA and brother of future Senate Majority Leader Bill Frist (R-Tenn.)

The company eventually paid over $880 million to reach a settlement with the Justice Department in 2002 on the charges.

Jonathan Cohn’s got more on Rick Scott and his new front group:

Richard Scott became famous, and infamous, for his management of the Hospital Corporation of America during the 1990s. More than almost any other individual, he is emblematic of everything that’s frequently wrong with corporate, for-profit medicine–and how it can twist the principles of well-intentioned reforms like managed care, designed to refocus medicine on prevention and efficiency, into a crude tool for cost-cutting and profiteering.

Scott left, or was forced out, from HCA just as it became mired in scandal in 1997, although Scott never faced any criminal charges. One might think that would be the last we’d hear from him, at least on this topic.

Well, guess who’s decided he has something to say about health care reform?

This old NYT write calls Scott “[t]he executive who became the most visible symbol of profit-driven medical care.” And according to Forbes, Scott’s company

…admitted to systematically overcharging the government by claiming marketing costs as reimbursable, by striking illegal deals with home care agencies, and by filing false data about how hospital space was being used.

The company increased Medicare billings by exaggerating the seriousness of the illnesses they were treating. It also granted doctors partnerships in company hospitals as a kickback for the doctors referring patients to HCA. In addition, it gave doctors “loans” that were never expected to be paid back, free rent, free office furniture, and free drugs from hospital pharmacies.

The investigation and the plea is an obvious blow to a company that became a Wall Street darling by promising to bring first-class business practices to the hospital sector, still dominated by not-for-profits. Under former Chief Executive Richard Scott, it bought hospitals by the bucketful and promised to squeeze blood from each one.

When you start hearing the same old scare tactics all over again, please keep in mind whom they’re coming from.