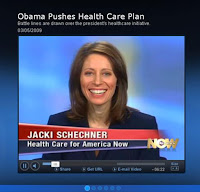 To say the past couple days have been busy would be an understatement. Today has been especially ridiculous (in a good way) what with this little White House Health Care Policy Summit and all.

We’ve already pushed out two press releases. Here’s a little nugget from each:

Making sure the people’s voice speaks louder than special interest money, MoveOn.org has collected 301,012 signatures and comments on a petition that reads: “Don’t let the insurance lobbyists delay health care any longer. In this economic crisis, we can’t afford NOT to pass quality, affordable health care for all this year.” Richard Kirsch and Roger Hickey, Co-director of Campaign for America’s Future, will hand-deliver copies of the petition to Members of Congress in attendance today.

Health Care for America Now Responds to Republican Senators Saying NO to Giving Americans a Choice of Private or Public Health Insurance Plans:

I’ll post all the relevant press coverage a little later, but for now, here’s a clip of me on ABC News Now’s “Politics Live” earlier this afternoon. A little summary of what I said courtesy of The Note:

Schechner expressed skepticism about how serious interest groups like America’s Health Insurance Plan, which helped sink President Clinton’s health-care plan, are about collaborating for a solution that dramatically expands coverage.

“Well, of course they want a seat at the table, but that’s about the end of where I take [them at] their word,” she said. “They’re going to do everything in their power to maximize their profits. That’s what insurance companies do. So, you know, they say all the right things and use all of the right buzz words, but they’re saying a lot of ‘no’ behind the scenes.”

Obama, she said, “can swing open the doors to the White House and hear everything that everyone has to say, but he’s made it clear over and over and over again that he’s not going to … bend down … and ingratiate himself to the special interests in Washington, and that he’s not going to do what the insurance companies and drug companies want him to do because that’s what Washington’s done for way too long.”