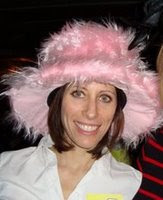 Much appreciation to those who’ve sent me kind words over the past week.

For the record, I threw a birthday party last October. It had a theme. Everyone wore something on his/her head. I had a fabulous furry pink hat. One friend donned her Burger King crown. There were ear muffs and homemade halos and oversized trucker caps. One brave soul even fashioned a topper out of a stuffed animal squirrel.

So yes, it could have been much much worse.

One thought on “Thank You”