I tried to update while en route to and from NYC, but something’s askew in Blogger on my berry. While I can input a title and text, I can’t actually post because there’s no “publish post” button on the screen. Anyone have any idea what’s wrong? If so, drop me a note.

Anyway, I am back in DC feeling like the trip was a success. The doctors we met with are totally jazzed about getting involved in lobbying their Members for real health reform which includes the choice of a public health insurance plan. It was inspiring to see physicians who truly care about what’s going to be best for their patients. I really hope this is just the beginning.

In other encouraging news, Jim Rutenberg’s got a profile of Rick Scott in the NYT today, and we got our 2 cents in:

“He’s a great symbol from our point of view,” said Richard J. Kirsch, the national campaign manager for Health Care for America Now. “We cannot have a better first person to attack health care reform than someone who ran a company that ripped off the government of hundreds of millions of dollars.”

And while in a meeting just now, I got news that the Congressional Progressive Caucus sent a letter to leadership saying they will not support reform that doesn’t include the choice of a public health insurance plan. Here’s a copy: 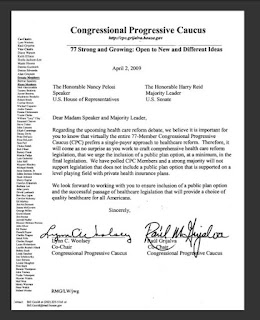