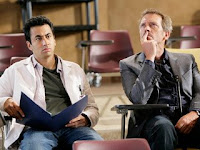 This is pretty cool. Kal Penn left House to work for the White House. From EW via Politico:

KAL PENN: Yes. I was incredibly honored a couple of months ago to get the opportunity to go work in the White House. I got to know the President and some of the staff during the campaign and had expressed interest in working there, so I’m going to be the associate director in the White House office of public liaison. They do outreach with the American public and with different organizations. They’re basically the front door of the White House. They take out all of the red tape that falls between the general public and the White House. It’s similar to what I was doing on the campaign.