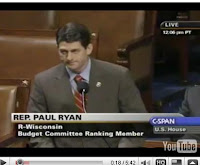 But at the same time, Ryan said that Obama’s victory and Democrats’ expanded majority in Congress give them the “right” to push their healthcare plans through — and said they will probably be able to do so using a procedural process known as “reconciliation” that makes it easier to pass bills in the Senate.

“It’s their right. They did win the election,” said Ryan, R-Wis. “That’s what I tell all my constituents who are worried about this. They won the election. They did run on these ideas. They did run on nationalizing health care. So, you’re right about that. They have the votes with reconciliation. They nailed down the process so that they can make sure they have the votes and that they can get this thing through really fast. It is their right. It is what they can do.”

“They hold the power, and they’re probably going to exercise it. We don’t like it because we don’t like what looks like the outcome,” he added.