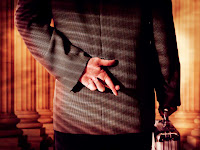 Now do you believe the health insurance industry is full of it? Ceci Connolly’s got the scoop:

One week after the nation’s health insurance lobby pledged to President Obama to do what it can to constrain rising health costs, Blue Cross Blue Shield of North Carolina is putting the finishing touches on a public message campaign aimed at killing a key plank in Obama’s reform platform.

As part of what it calls an “informational website,” the company has hired an outside PR company to make a series of videos sounding the alarm about a government-sponsored health insurance option, known as the public plan. Obama has consistently maintained that a government-run plan, absent high-paid executives and the need for profits, could be a more affordable option for Americans who have trouble purchasing private insurance. The industry argues that creating a public insurance program will undermine the marketplace and eventually lead to a single-payer style system.

In three 30-second videos, the insurer paints a picture of a future system in which patients wait months for appointments and can’t choose their own doctors, according to storyboards of the videos obtained by the Washington Post.

Here are the storyboards. All on the same side, eh?

Jason’s got more cross-posted on our blog and HuffPo.